As enterprises are struggling with ever-growing amounts of data, visualization is the only way to make these volumes accessible. Business decisions should be made on the basis of data accessible immediately and timely, wherever you are. Decisions often have to be made in a snap, with simply no time to commission somebody to do the analysis offline - you must have the data here and now. With data visualization tools you can generate stunning visuals which show exactly the data that is relevant for a given query without any other interference. Data visualizations are not only an aid for you in decision-making process, but also a tool that will help you deliver compelling presentations. Different types of graphs make it easier for your audience to understand the data and see it not just as a dry account of facts, but as a story they will believe in and that will inspire them to action. It’s a fact proven by researchers from Cornell University - including a graph significantly increases reader persuasion. In their study only 68% of participants believed a scientific claim without a graph, a whopping 97% of participants believed that same claim when a graph was included. It’s not a stretch to extend their conclusions to presenting non-scientific data. Your audience associates data visualizations with science and this effect makes your presentation more reliable and persuasive.

This type of data visualization mistake is most conspicuous when made on a chart put together out of visual elements that should make up a whole. Like in a pie or a stacked-bar, the numbers should add up to 100. This might sound too obvious too be mentioned here, but you will be surprised to see how many times people make it. It’s not that they can’t add up - the reason behind this mistake is to find in the nature of the survey. In most cases the respondents were allowed to choose more than one option so the results can’t add up to 100 like in the example below. However, in such case a pie chart is not the right choice to reflect the data. 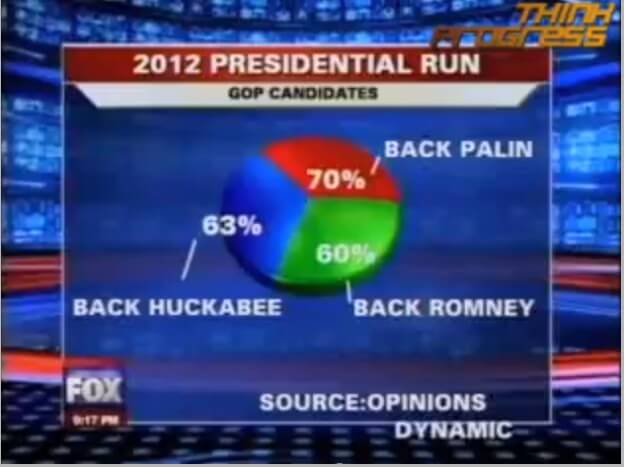 To avoid this mistake, double check your numbers and make sure you use a standard data visualization tool which wouldn’t allow you to set up a chart containing a logical mistake.

This is one of the most common data visualization mistakes – choosing the chart type based on your aesthetical taste rather than on the character of your data. Every type of data requires a different data visualization. For example, if you want to present a sales growth comparison in the last 5 years, it’s better to use bar charts that can clearly show the difference at a glance. If you want to show a relationship between two metrics, on the other hand, a scatter chart would be a better idea. The bubble chart below fails to show the relation between the amount of money donated for treatment of a particular illness and a number of deaths caused by it. The annotation method is also rather unfortunate. A simple and easy bar chart would do a better job. 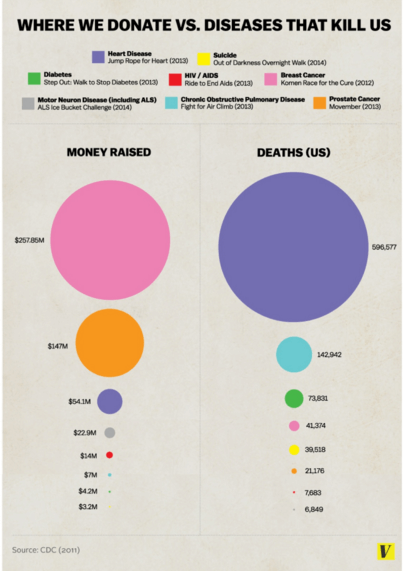 The best way to avoid all these errors is to state the goal of your visualization first. How much data do you have? What are the relationships the between numbers? Don’t be afraid to experiment, test different kinds of charts to find out which one best emphasizes the data insights you want to get through.

Displaying too much data

The difference between a crammed with numbers Excel file and a clear data visualization usually lies in impenetrability of the first one and accessibility of the second. That’s what data visualization is intended for – to simplify and structure massive volume of data. However, it seems that some data presenters forget about this founding statement of data visualization and let themselves go displaying every possible data item they gathered and delivering unendurable, meaningless presentations with cluttered charts. Over-complication is a data visualization mistake that is sure to discourage most viewers as it makes it impossible for the audience to figure out where and what to focus on. The following chart should inform about the percent of job losses relative to peak employment month but it’s difficult to track the lines individually, let alone in comparison to each another. 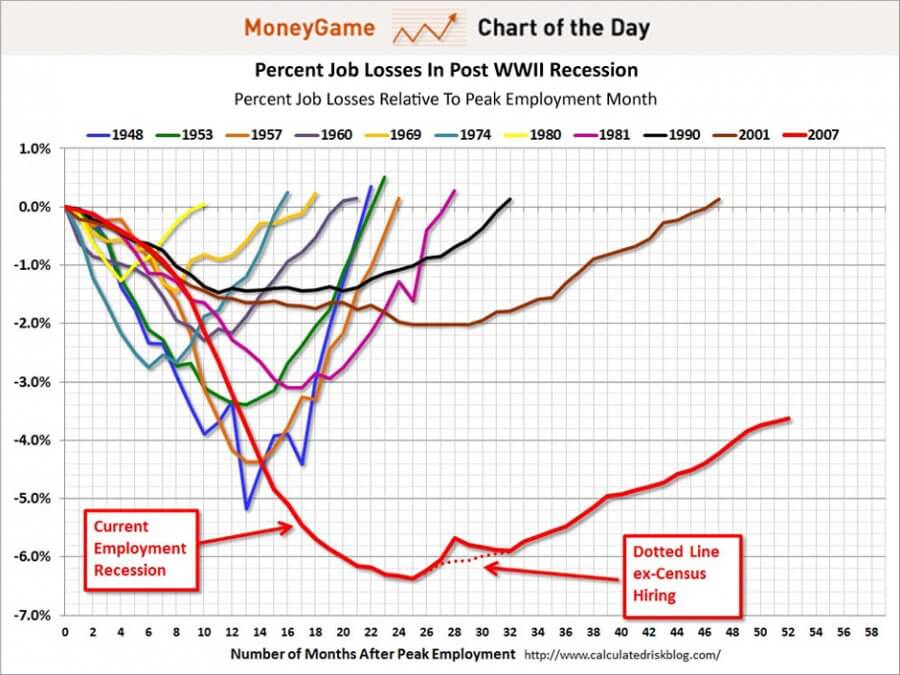 You visualize data to deliver specific, relevant and quick answers so first use your good judgement to sift through the data and choose only the points that interest your audience and deliver meaningful insights.

Trying hard to be original

One of the reasons that infographics and graphical representations of data have become so popular is that most of people read charts in the same way regardless of the culture they come from. The reason for this is that they have become accustomed to the standard way certain types of relationships between data are usually displayed. They already have that pattern of charts analysis in their minds, meaning that any deviation from it, would only make the reading of charts more tiring and the message harder to decipher. So turning your chart upside down is not the best idea. 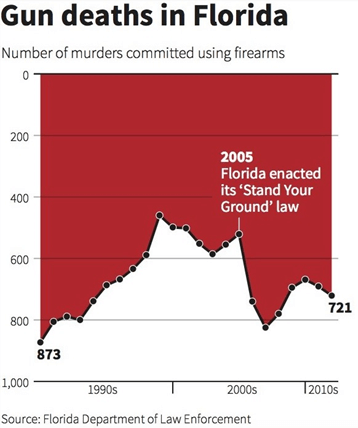 Stick to conventions. Most exotic graph types are seldom seen, because they don't work very well. The vast majority of visualization needs are well addressed with bar and line graphs, scatter plots, and pie graphs. Trying to change a proven method is going to nullify the simplicity that data visualizations represent.

Making the reader do more work

As we already mentioned data visualizations are here to help viewers understand data easily. But there are some petty practices or lapses that can be a pest to every data user. For example, forgetting to annotate an element of the chart. Sometimes a visual alone doesn’t suffice, and you need to add qualifying text or numbers to the chart to make it more meaningful. It’s good to help the reader understand data by adding some graphic elements. For example, adding a trend line to a scatterplot to highlight trends. Another common data visualization mistake is arranging data non-intuitively. Present your content in a logical way and guide your readers through the data with categories ordered alphabetically, sequentially, or by value. The 3D bar chart presented below not only makes it difficult for the viewer to connect visuals with values, but it also literally obscures some data items. It’s a negation of the very purpose of data visualization. Remember that although you’ve probably already analyzed that data and you know it by heart, your audience may see them for the very first time.

How to avoid data visualization mistakes?

The best way to avoid all these errors is to focus on your goals first. Before considering how your visualizations should look, think about what they should communicate. What purpose should your data serve? What decisions do you need to inform? Which data point is most important for your audience? Think about the key relationships among data fields and if the type of chart you chose renders these relations. Group data logically by category, and then order the data by time, magnitude, importance or letters of alphabet. Use color for category, not magnitude; you can use brightness or saturation to illustrate magnitude. Don’t forget about labels and annotations, but stay modest to draw attention without cluttering.

Failed data visualization can make even best data useless. After you prepared your graphs, go through the mistakes we listed again. It's likely that you'll have to make changes. This is a good thing. Test different approaches to get the user-oriented design that highlights exactly the point you want to make.

From politics, to business, to science, the misuse of data creates the potential for not only ethical violations, but for a negative impact on data ROI. Learn more about the methods of data misuse in these examples!