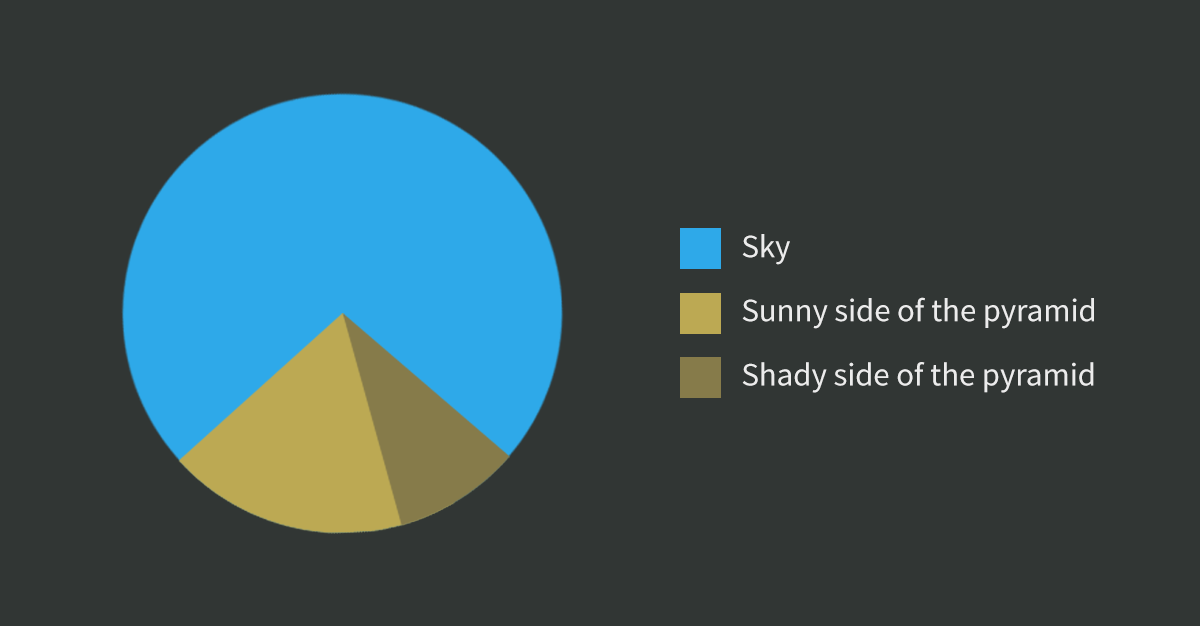 Data visualization tools give businesses the opportunity to display data using various visually appealing graphics rather than traditional rows of numbers. The state-of-the-art business dashboards offer many options of visual data representation on graphs and charts, but still the pie chart remains one of the most common of these tools and yet the most notorious. There exists a never-ending discussion among data analysts if a pie chart is a reliable way to display data. As much as it is simple to create and understand, it is also limited by its simplicity and the capability to display only basic relationships between quantities.

Your Chance: Want to creat your own charts completely for free? Explore our 14-day free trial & benefit from great visualizations today!

Data scientists generally disapprove of pie charts but must honestly admit that the discovery of a pie chart was as important for the discipline of data visualization as the proverbial invention of the wheel. William Playfair is credited to be the mastermind behind the first pie chart. In 1801 he was the first scientist to use it in his publication entitled The Statistical Breviary. In this work, he used different graphs to present geographical areas, populations, and revenues of European states. Pie chart isn’t the only graph discovered we owe to Playfair, the another one is the bar graph. Moreover, he was the first to use line graphs as a means to display quantitative values across time. More than anyone before him, Playfair relied on graphical representations of quantitative data because he believed that “making an appeal to the eye when proportion and magnitude are concerned, is the best and readiest method of conveying a distinct idea” as quoted in the article by Stephan Few.

Nothing is easy in the world of statistics so even pie charts constitute a graphs category that can be divided in to several types.

It’s a traditional pie chart that got slanted and visually upgraded by adding a third dimension. This type of chart is usually used for aesthetic reasons and makes data interpreting even more difficult. The perspective added by third dimension only further distorts the proportions between the pie slices.

The typology of pie charts gets even sweeter if you add a blank center in the middle of the circle. This additional space allows for additional information about the data.

It’s a chart with one or more sectors separated from the rest of the disk. This effect is well fitted to add emphasis to an individual data sets or to display smaller segments of the charts in a clearer way.

The polar area diagram is similar to a usual pie chart, except sectors are equal angles and differ rather in how far each sector extends from the center of the circle. The polar area diagram is used to plot cyclic phenomena. For example, to display data about each month – the pie would be divided into 12 segments, each with the 30 degrees angle, and only the size of each slice would reveal us the data. This type of pie charts is usually less frowned-upon as it allows for multiple comparisons.

Multilevel pie chart also known as the ring chart (which makes total sense if you google it) is used to visualize hierarchical data, depicted by concentric circles divided into slices. Again such juxtaposition allows for easy comparisons and displays hierarchical relationships.

The above typology of pie charts has showed that they are able to display much more than just a few slices. So what are the most common disadvantages of pie charts according to data scientists? First of all, a pie chart becomes less effective if it is divided into too many pieces of data. You probably will be able to read a pie chart with up to 10 segments, but more slices than that would be a pain. The situation gets even more complex when the quantities displayed are very similar and so the pie slices are similarly sized – in such case the pie chart becomes useless. Moreover, adding data labels wouldn’t help here, as the space is very limited and the visualization may become too crowded and hard to read. Another, drawback is that a pie chart displays only one data set, to compare multiple data sets you would need a series of pie charts which would make this kind of data visualization too time-consuming. Comparing data slices in a circle causes problems to the readers also because people generally have problems with estimating dimensions. For example, they can be misled by colors or the position of the slices with brighter ones looking bigger and same sizes not so obvious when the slices are non-adjacent and shifted. This poses a threat as we don’t want our readers to draw inaccurate conclusions and make decisions based on visual impact rather than data analysis. Furthermore, if there are too many slices of a pie chart it is easy to mislead the viewers or make some common data visualization mistakes.

But pie charts are not as black as we paint them

Yes, this sweet-named type of charts also have some advantages. The primary strength of a pie chart is that there is no better data visualization type to display the part-to-whole relationship. Not without reason children learn fractions by looking at pies sliced in various ways and decoding the ratio (quarter, half, three quarters, etc.) of each slice. A bar graph doesn’t have this obvious purpose built into its design. A pie chart is so easy-to-understand that it’s almost intuitive. It can be an effective communication tool for even an uninformed audience. Readers or audiences see a data comparison at a glance, enabling them to make an immediate data-driven decision. This type of data visualization chart removes the need for readers to examine or measure underlying numbers themselves because if data proportions differ enough, the reading of the chart is rather obvious. On the other hand, the natural competitors of pie charts don’t provide the representation of the whole ready for the juxtaposition thus making part–whole estimation more difficult. The divided pie chart does provide an obvious pictorial representation of the whole. For this very reason many instruments have circular dials (speedometers, clocks, thermometers etc.). Additionally, they take up less space while providing the needed information at a glance.

That’s about it when it comes to advantages of pie charts. For the future maybe let’s agree that data scientists are right about pie charts and choose a better data visualization type.

Your Chance: Want to creat your own charts completely for free? Explore our 14-day free trial & benefit from great visualizations today!

An overview of the power and potential of social media reporting in our hyper-connected digital age.

Uncover the true potential of social media dashboards and enhance your social media strategy with our complete guide.

Accounting reports are important elements of business, regardless of a company’s size. They track the financial health of a business and its evolution over time. However, they lack proper visualization to convey their oh-so-important information. Find here why and how to do it.