In this post, we are going to examine the history of business intelligence through the 19th and 20th centuries, all the way up to present day.

A History of Business Intelligence And Its Evolution

The Very Beginning of BI

The first time somebody used the phrase “business intelligence” was in 1865.

In the book, Cyclopaedia of Commercial and Business Anecdotes, Richard Devens used the term to describe how a financier had successfully beaten his competitors; through understanding the market and the conditions surrounding it better than they did. This concept is certainly just as relevant today as it was back then.

Unfortunately, the financier in question ended up using his business intelligence immorally and became known as a corrupt banker. Luckily, the next big use of BI would be on the right side of the moral compass.

Business Intelligence Used In WW2 and the 1950s

The Allies use of cryptography during World War II is a great example of the tools and principles of business intelligence applied in a very different setting.

The Allies had to collect vast amounts of German communication, examine those encrypted communications for trends, and then find the useful information within those trends.

Their constant diligence eventually resulted in them cracking the Germans’ infamous “Enigma” cipher over and over again, leading to intelligence advantages for the Allies.

For example, in 1958, a key BI journal paper, A Business Intelligence System, was published by IBM employee Hans Peter Luhn. This paper showed remarkable foresight and vision for what business intelligence would look like in the years to come. The paper remarked upon the challenges organizations faced due to the large amounts of information they had to deal with and use in order to make decisions.

Luhn also showed off his technical prowess by outlining a layout of solutions that could help companies to use data more effectively. While the specific technologies used at the time of the paper have dramatically changed, the overall concept presented is still highly relevant: to give end users the information they need to know to make good business decisions in the most digestible format possible. Today, we call it data-driven decision making.

The technologies outlined in the paper were used by IBM to create some of the first real business intelligence systems. Because of this, Hans Peter Luhn is commonly referred to as the “Father of Business Intelligence.”

What's truly remarkable is that Hans predicted several current cutting-edge business intelligence trends, going so far as to predict the ability of information systems to learn based on user interests. In other words, machine learning was predicted in the 1950s buy an IBM Superstar!

Continuing on from the theoretical foundation of business intelligence, the 1970s saw some of that theory get put to use.

The 1970s were a time period when big names like SAP started to use business intelligence for massive corporate clients. They helped companies put their data into databases, and create reports based on that data.

However, these databases were often very siloed. Due to being very one-dimensional, the flexibility of their use was limited. Data that would be entered one way in one database would be entered in a completely different way in another.

For example, with U.S. states, one database might use initials such as “OH, NJ, NY” while another used the full names “Ohio, New Jersey, New York”. A database set up to read U.S. states as initials wouldn’t be able to use that data if it was input as full names. This kind of rigidity in BI systems made it challenging for databases to “cross talk” with each other.

However, without these foundational steps, the innovations of the 1980s and beyond would not have been able to take place.

One of the first real applications of BI came from Nielsen. Nielsen is the company which produces the Nielsen ratings, which gauge how many people are watching a particular TV show at any time.

In the 70s, they partnered with IRI to offer retailers a “dimensional data mart.” This data mart helped merchants to see sales trends and retail analytics they might otherwise miss.

The 1980s - Data Gets Unified Through Data Warehouses

In the history of business intelligence, the 1980s are known as a time where big data saw some big changes.

Figures like Bill Inmon (the “The Father of Data Warehousing”) and Ralph Kimball led the way towards organizing data into data warehouses that could be used to access and manage data in one place.

However, these data warehouses still had their challenges. They were often very technical in nature. They required an (expensive) IT staff specifically dedicated to a business intelligence platform in order to run reports. The average business user had no hope of being able to make use of this technology.

Additionally, due to the engineering challenges of asking questions and the processing limitations of computers at the time, reports would often take quite a long time to run. This could make them irrelevant by the time they were finished depending on the nature of the request.

While business intelligence had come a long way since simply papers stuffed in filing cabinets, it also still had a long way to go.

During the late 1970s and 1980s, one of the earliest applied forms of business intelligence were used - green bar reports. These reports were used for things like taking inventory of stock items, listing the assets and liabilities of a corporation, or doing payroll.

The name “green bar reports” comes from the iconic bars which gave contrast to the paper.

These reports were a function of a new BI technology - decision support systems (DSS).

Decision support systems were information storage and management systems that gave you regular reports for defined Key Performance Indicators (KPIs), as well as the ability to create custom reports for new queries or KPIs you might have on the fly.

This was a period when business intelligence history accelerates, and went from being a very niche area to one that was more commonly known in the business world. More and more companies started up to provide BI tools.

However, the technology side of business intelligence was still quite raw. BI solutions in the 90s were extremely expensive. Furthermore, it could take weeks — even months — in order to ask a BI question. Once a question was “engineered,” you could learn the answer quickly, but only for that question.

These systems were not very flexible, and only the biggest companies could afford the budget for these solutions. Since the questions took so long to set up, companies inevitably focused on their core KPIs and nothing else when using BI - which is not conceivable today, as we know that it is only by asking the right data analysis questions that you will get something valuable from your data.

OLAP stands for OnLine Analytical Processing, and these OLAP cubes were the precursor to modern real-time analytics platforms.

In the past, IT users were the only ones able to access databases. OLAP cubes allowed business users to query a database using English rather than a command line prompt.

They also were faster than data siloes due to the fact that they only analyzed (read) data, and didn’t create new data. These OLAP cubes started being used in the late 1990s after Microsoft developed the MDX language to interact with them.

A Business Intelligence History Interlude - The Rise of The Personal Computer

One thing that is worth mentioning at this point is that personal computers and the internet were not widely used until about 1995. 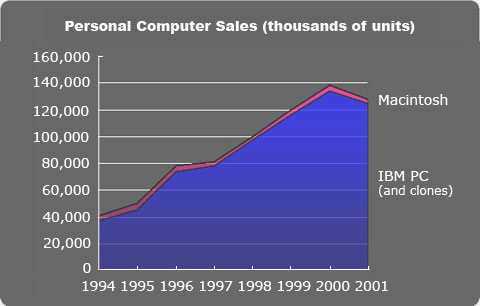 These PC sales were mirrored by an exponential increase in the number of internet users:

The mid-to-late 1990s were when everyday people could start to use the internet for their own purposes related to recreation, and not just business.

This shift influenced the future of business intelligence solutions. It marked the beginning of a trend towards more user-friendly data analysis software.

Due to exponential increases in processing power, and increased demand for more intuitive business intelligence solutions, the 21st century has seen a rapid increase in BI platforms’ flexibility and ease-of-use.

For example, the 2000s saw the first cloud BI software. These software enabled smaller companies to use BI, as they didn’t have to use an expensive enterprise solution with hefty up-front setup fees.

Another new capability was real-time processing through frameworks like Hadoop. In the past, databases would have to be updated in “batches,” which could involve significant lag time. Real-time processing allows for completely up to date information to be used in business decision making.

Finally, BI platforms started to be offered as self-service analytics software. These solutions allowed a layman, non-technical user to intuitively generate reports and data through clicking and a drag and drop interface rather than typing into a command line.

All of these innovations were spurred on by market need. The rise of social networks, increasing use of the Internet, smartphones, and data, in general, caused the amount of data in the world to skyrocket.

Interactive business dashboards are one very recent development. They allow business users to customize their view of a dashboard “on the fly,” in real time.

Let’s say a sales manager wants to see the overall trends for this quarter. They can look at one dashboard view which shows the average closing rate, sales cycle length, and so on. However, if they want to zoom in a level, they can click on their interactive dashboard and see which sales members are performing at what level.

Business intelligence is constantly evolving. While we have come a long way since the days of “let’s ask IT a question and we’ll get an answer back in a few weeks,” there are still many innovations to be had.

For example, machine learning (the process of computers upgrading their capabilities by themselves) is a recent technology buzzword for good reason. There’s only one thing we can count on with absolute certainty as the future beckons - constant change.

The history of Business Intelligence is fairly recent, but accelerating and getting more dense by the day. BI allows us to make the best decisions we can in the midst of an uncertain future. Start your BI journey safely with datapine, and benefit from a 14-day free trial of our BI software!