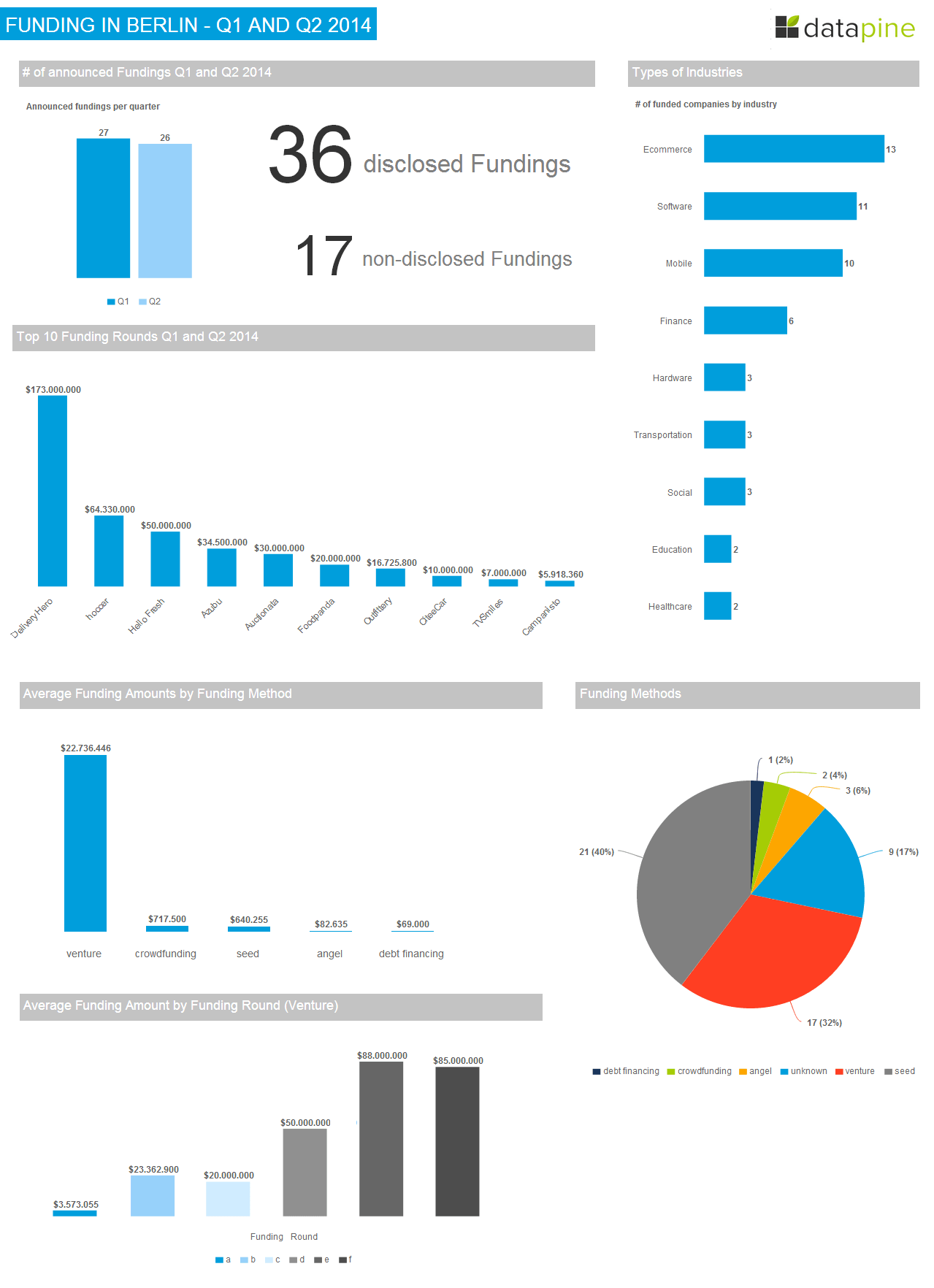 The recent common assumption that Berlin’s startup scene was more hype than substance has been proven wrong. VC money continues to flood into Berlin. In fact, the amount of capital quadrupled from 2009 (34.2M euro) to in 2013 (133.3M euro). In the second quarter of last year, Berlin out-raised London in total VC investment for the first time. Last year’s rounds and exits were widely reported. Now, let’s look at the action thus far in 2014. Here is our Q1/Q2 funding analysis of the Berlin startup scene.

Our data was sourced first through Crunchbase, then cross-referenced with press releases. Obviously, it is not perfect. If you spot an error or something we’ve missed, shoot an email to kalie@datapine.com and we promise to check it out.

All data was analyzed and visualized with our data visualization and dashboard software. 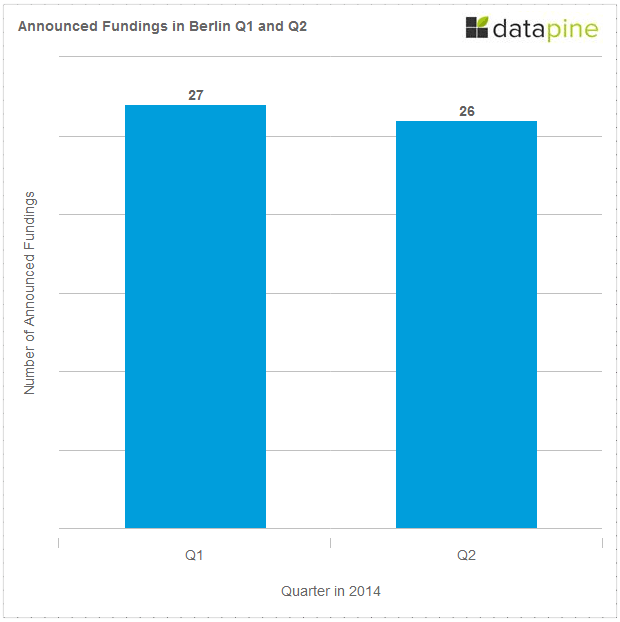 The number of companies funded in Berlin was almost evenly distributed across both quarters. Twenty-seven Berlin startups announced funding in Q1, and twenty-six in Q2. 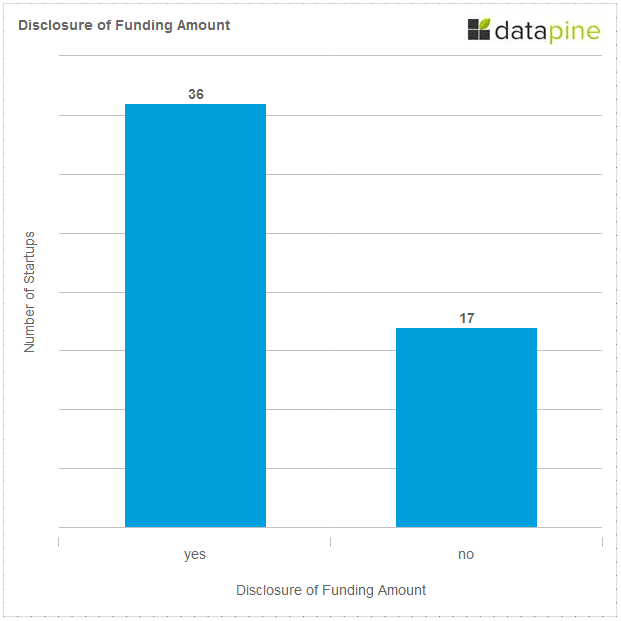 Per usual in Germany, many companies chose not to disclose the exact number of their round. Thirty-six startups disclosed funding; seventeen did not. Of companies that did not provide a specific number, Lesara, Coffee Circle, Ezeep, Amorelie and GoEuro reported funding in the seven digits. Startups Niiu, Flowkey and akvolution raised six digit rounds. 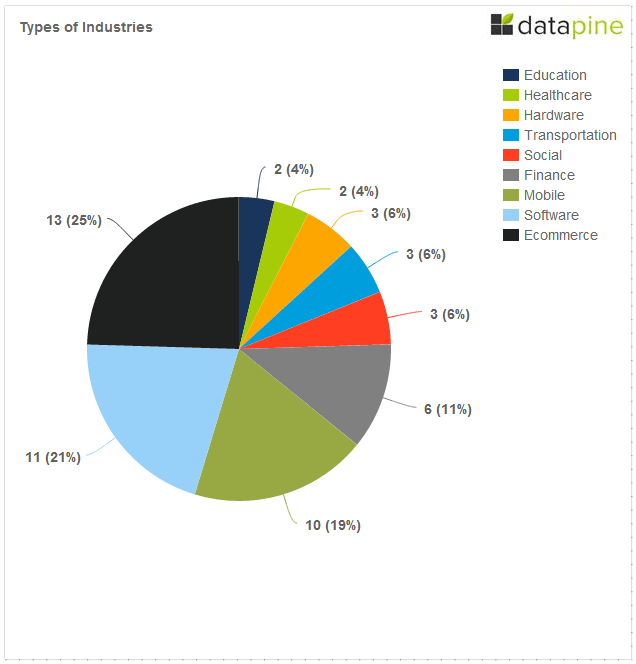 As is standard in Berlin, most of the funded companies (13) are e-commerce related. The industry was closely followed by both software (11) and mobile (10). In line with global startup trends, finance accounted for 6 companies, hardware and transportation for three each. The list was rounded out by by social (3), education (2), and healthcare (2). 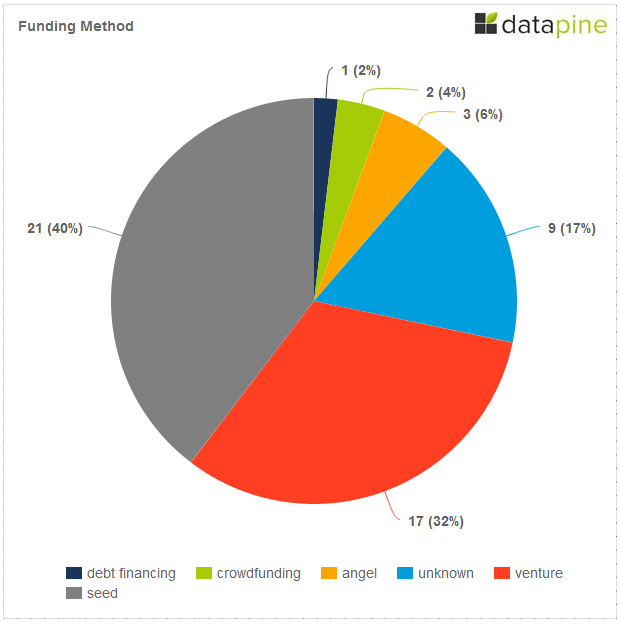 Berlin has seen strong early-stage funding and deal activity - a good first step toward a healthy ecosystem. While we realize seed funding is part of venture capital, we separated out Series A and above for a more thorough analysis. Seed funding accounted for the 40% of Q1 and Q2 activities, followed closely by venture capital (32%). Nine companies did not disclose their funding method; three companies raised from angel investors, two companies crowdfunded, and one company received debt financing via convertible note. 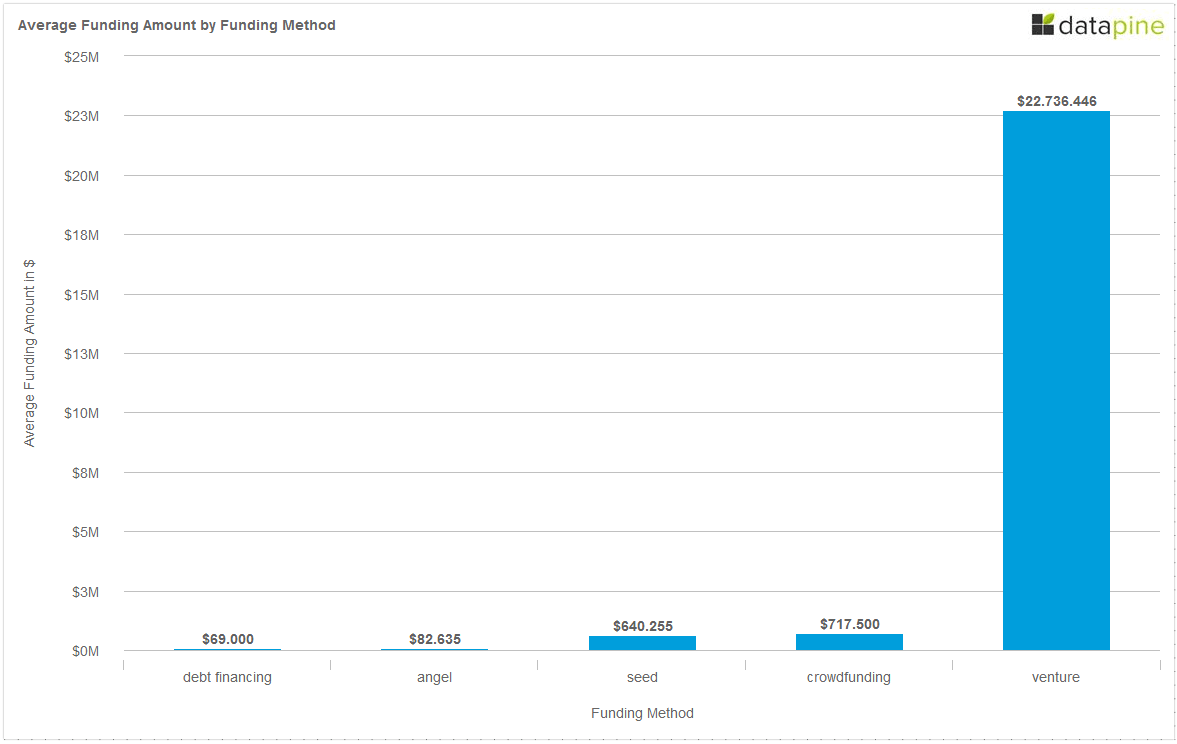 The real cash, as you might expect, comes from VC’s. Seventeen Berlin companies announced securing venture capital, and of those, fourteen disclosed numbers. Those fourteen raised an average of $22.7M from venture capital in Q1 and Q2. This number, of course, is an average, which is considerably higher than the median amount, thanks to Delivery Hero’s Q1 $88M round, and Q2 $85M dollar round. The median was under $10M, and when we remove the outliers, the average is $12.1M.

Out of the twenty-one companies that raised a seed round, only thirteen disclosed actual numbers. The average seed round of those thirteen startups was $640,255.

Average Funding Amount by Round for Venture 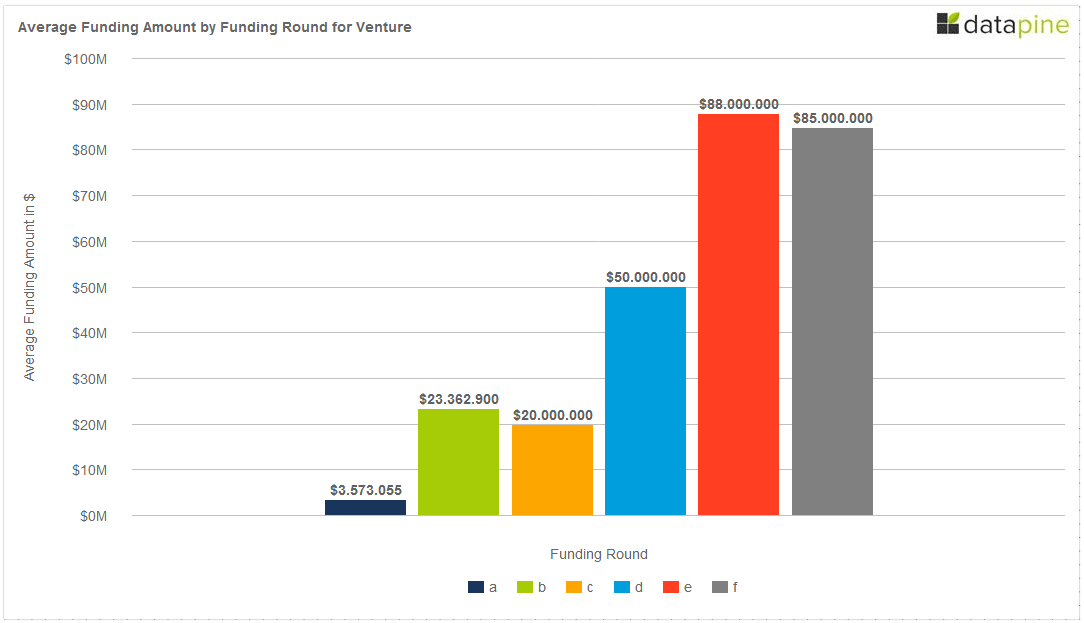 Seventeen companies raised venture capital funding, but three did not identify a specific round. Of the fourteen companies that did, eight raised Series A for an average of $3.5M. Two raised series B for an average of $23.3M.Foodpanda raised series C for an at $20M. Hello Fresh closed a Series D round at $50M and Delivery Hero raised a series D for $88M, and then a Series F for $85M. Obviously, there is only a solid sample size for Series A averages, but we hope that as the year goes on, there will be more Series B-F data for analysis. 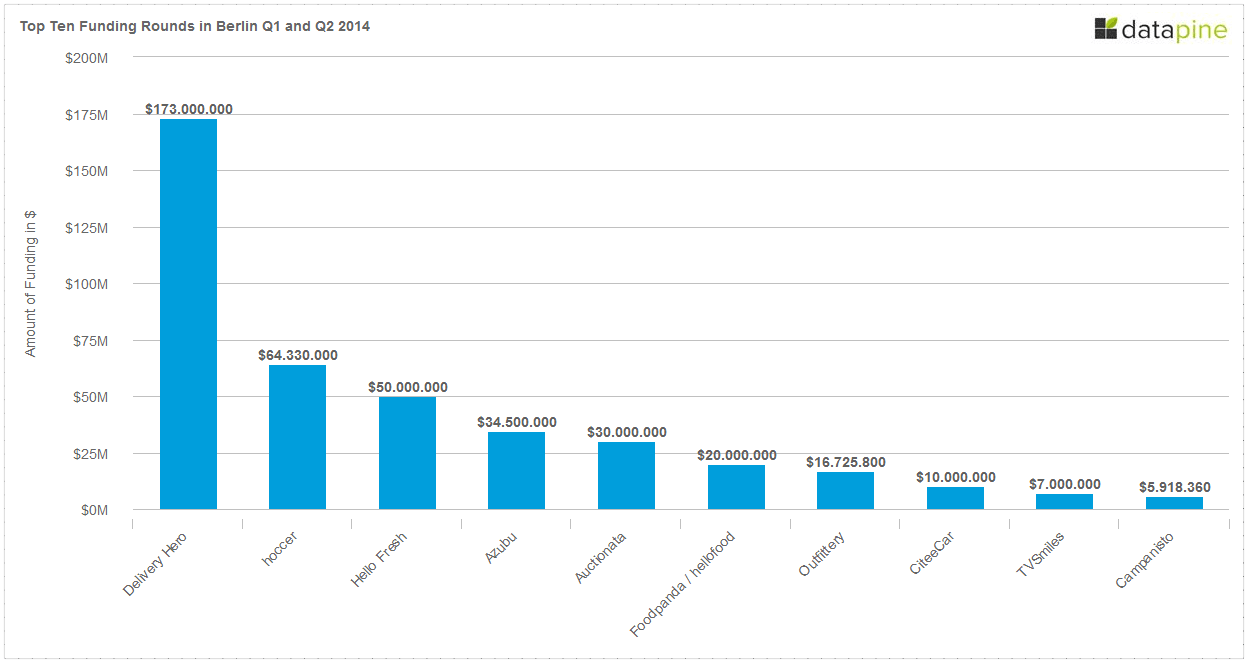 While Q1 and Q2 were significant, Q3 is heating up nicely with some familiar faces from the first half of the year. FoodPanda secured another $60M in funding earlier this month. Delivery Hero announced the acquisition of Pizza.de, another German based competitor, causing speculation that the total valuation of Delivery Hero is now over $1 billion.

The future is bright and getting brighter. Our projection, from available data, is that 2014 investment will beat last year’s funding by a significant margin.

Stay tuned for our Berlin Q3 Funding Roundup. Again, if we missed something, please let us know at Kalie@datapine.com.