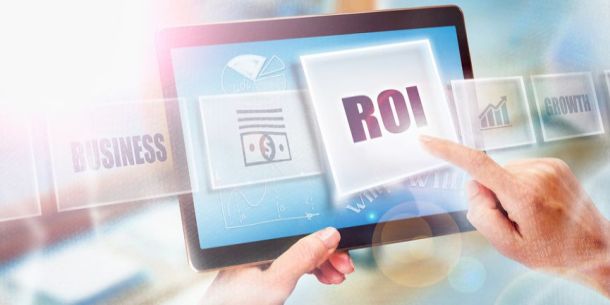 In a study conducted by Gartner, they analyzed the impact modern BI platforms have on companies and the benefits they bring, and provided recommendations for leaders: business intelligence is a great investment for your company. But they are not gospel truth, and when it comes to bringing about corporate change, being able to show the Return on Investment (ROI) of your actions can be extremely powerful and requested.

In this post, we’ll examine the challenges related to that question, along with some of the ways you can think about this issue. By the end of this post, you’ll be “armed” with some persuasion points that you can use to convince others in your company to start using business intelligence tools.

How Many Companies Actually Conduct ROI Analysis for Business Intelligence?

In general, calculating the ROI of any big projects that your company does is good practice. It makes good business sense - you want to make sure that the dollars you invest are bringing you back more dollars. This is the essence of being a profitable company. And many companies do have their IT departments calculate the ROI of projects, as shown by this graphic from the Noetix whitepaper “Key Metrics for Determining ROI for Business Intelligence Implementations”:

This whitepaper got its data from 415 survey respondents through a web survey that Noetix conducted. The respondents had a wide variety of roles, but mostly they were employees in IT roles (the most common roles being the IT director and system analyst). As you can see in this graph, about 11% of companies never conduct ROI analyses, while about 27% do so for every project. Most companies are in the middle.

However, this data is for any kind of IT related project. When it comes to business intelligence, things get measured less, as shown in this graph from the report:

As you can see, the majority of companies (about 55%) have not conducted an ROI analysis of their BI related investments. Why is this?

Well, for starters, doing any sort of ROI-related analyses can be challenging, regardless of the project.

As Noetix says in their whitepaper, ROI studies can be complex. The investments in IT have a lot of different expenses (direct, indirect, and related), which makes the calculation of benefits and returns challenging. The benefits of new IT projects are always tangible and intangible, and many of these benefits are hard to evaluate financially. But measuring business intelligence ROI is even more challenging than IT investments.

As for why ROI for BI projects is specifically more difficult, there are a variety of reasons. You have to deal with:

In general, calculating ROI for BI applications is a murky, difficult, and time consuming process - which is why many companies don't do it.

However, one potential “game changer” here is that many of the biggest benefits from BI are intangible.

For example, let’s say that you have a data analysis tool that allows you to see that your cashflow will most likely be tight in the coming months. This information helps you make the decision to hold off on capital heavy expenditures until you have more liquid cash reserves available.

How do you calculate the ROI of this kind of information? It’s extremely challenging. And that’s a somewhat cut and dry application of BI! When it comes to more subtle decisions, things get even harder.

That’s why a majority of survey respondents said that they believe the intangible (aka hard to quantify for ROI purposes) parts of BI are more important than the tangible benefits.

You can see that information here in graph form:

53.8% of respondents agreed with the idea that the intangible benefits of BI are more important than the tangible, measurable benefits, while only 15.8% disagreed.

As Noetix says, companies do not conduct an analysis on business intelligence ROI perhaps in part because most of the people think that the intangible benefits are more important than the tanglible ones, as the tangible is easier to measure.

The Costs of Not Having a BI Solution

So, where are we at now in regards to finding the business intelligence ROI?

Costs of not having BI:

Now, let’s look at what your life is like if you have a SaaS BI tool:

OK, OK. You want some hard numbers for how much money a BI solution would save you. Well, we have just the thing for you. Just so you can see an example, here’s how much money you would save in a company that has 10 clients with 3 business dashboards each, spending 4 hours per month preparing each dashboard:

To try it by yourself, calculate here how much money your company would save switching from a legacy spreadsheet BI solution to a cloud based one.

But in general, we’re not the only ones stating this message either. As a Matillion article states, according to Nucleus Research (a Boston-based firm specialized in measuring the value of technology), the report automation yields an average ROI of 188%. Report automation consists in cutting out manual report production, saving time, and reducing errors.

Now that you’ve delved into the difficulties of calculating the business intelligence ROI, and the costs of using a legacy BI solution, let’s move into some research that shows how companies with a data-driven culture have a competitive (and financial) advantage in the marketplace.

The Competitive Advantages of Business Intelligence

Backing up this claim, The Economist Intelligence Unit conducted a survey about the fostering of data-driven culture on 530 senior executives from companies around the world, in addition to doing in depth interviews with a handful of these execs. Some of these insights are analyzed in a CIO article.

This data led to some interesting insights, such as operational efficiency being the biggest motivator for executives to invest in BI technology: 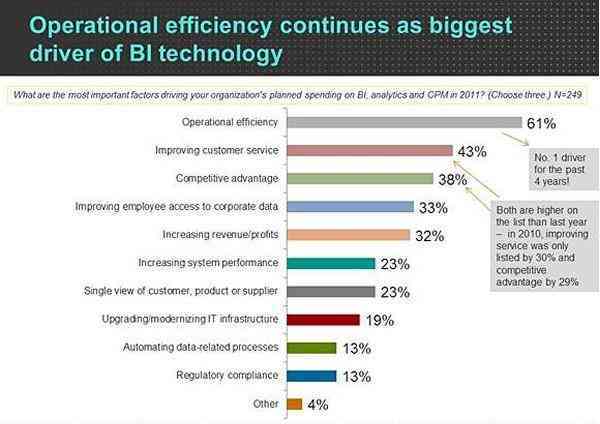 Additionally, consider these data from The Economists’ study:

Finally, Nucleus Research, which conducts case studies of business analytics, found that “the average returns from analytics have been increasing, reaching $13.01 for every dollar spent in 2014 from just $10.66 in 2011.”

In this article, we broke down:

To benefit from it, you can start a free 14-day trial and test datapine's self-service business intelligence software!

Unlock your full business-leading potential through the power of Salesforce reports.

Here we explore the what, whys, and how's of customer service reporting.